To jump straight to Katie’s review of The Cruel Prince, click here. 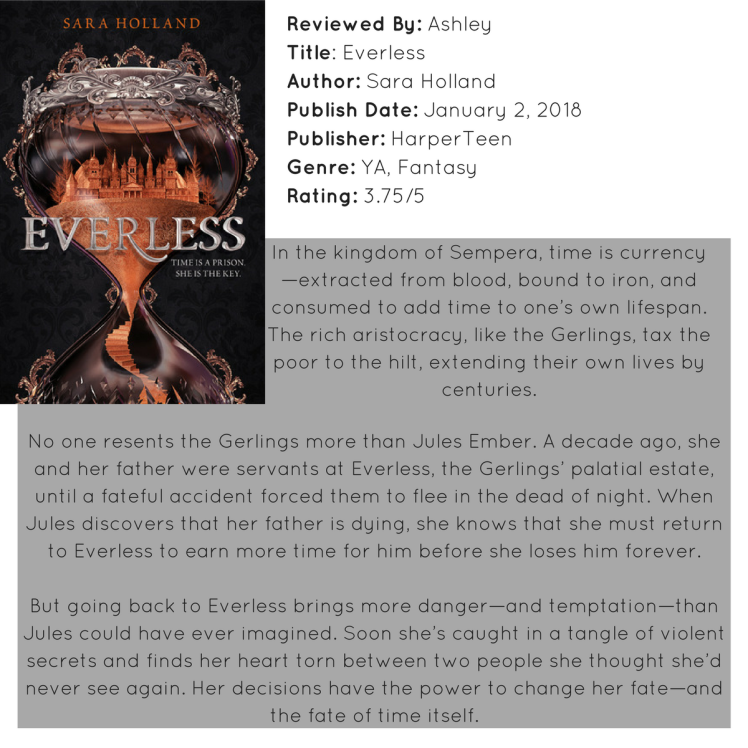 “…The world seems to slow. No, not seems. The branches really do stop whispering in the wind. Even the most inaudible crackle of the snow melting on the ground stops, like the world is holding its breath.”

Ah, Everless. I have been so excited for the premise of this book. Blood used as time and money isn’t something I have read in a YA fantasy before, so I was immediately drawn to it.

It certainly delivered in this area. We get to see both sides of the blood iron, the poor who sell their time to pay the bills, and the rich who have so much time to spare that they use it as fertilizer in the gardens. The gross contrast I expected was certainly there, and there was no shying away from the darkness of it all. Servants or disobedience (no matter how small the transgression) were punished by bleeding time from their life; More time is taken from the poor at the hands of the rich.

There was also an interesting look at magic. Despite time almost having a power of its own and legends told about the magic of a Sorceress and an Alchemist, magic was just a folklore. It was strange for it to be blatant in some areas, yet not available readily in others. However, I do think this added to the myths and legends aspect that plays an increasing role as the book progresses.

So as far as positives in this book, I enjoyed the plot a great deal, and I found it executed well. I also really loved the twist at the very end, because if I’m honest, this book was highly predictable in a lot of areas. The surprise ending was much needed, and I’m thankful for that.

So now for the cons. Or just one, in particular: Jules. For the main character, she wasn’t the easiest to like. It was like beating a dead horse with the number of times she mentioned how sweet and kind and like totally perfect Lord Roan was, while his brother Lord Liam was the big, nasty, mean man. Unfortunately, this added to the predictability as I really only saw this going one of two ways, but I’ll let you figure that out.

I also found her contradicting at times. She claimed to fear Liam, yet she would be all up in his face in an instant. She had no qualms about being snarky so someone she feared would kill her if he recognized her? Sometimes it just didn’t add up.

However, near the last 50 pages, I found myself starting to be okay with Jules. I don’t hate her, at least. But I definitely want to see more character development as the series goes on. Sometimes finding out about your “past” or “who you really are” is used as character development, but it’s not. The discovery has to change you somehow, the knowledge can’t just be there and it be considered development.

Overall, I really did enjoy this book. I felt it was an interesting premise and a good set up for a sequel. I have high hopes that the next book might change my mind about Jules. 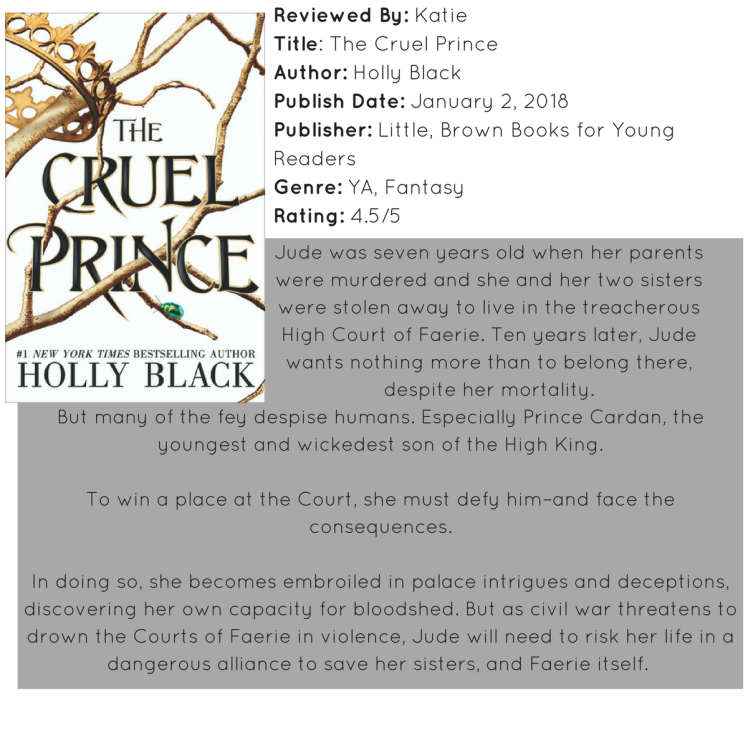 In Holly Black’s latest novel, The Cruel Prince, a mortal must find the strength within herself to save not only her family but her entire world. Sound familiar? I thought the same thing. However, Holly Black took that tired, old trope and made it new, interesting, fresh. Cruel Prince is full of mystery and deceit with a side of political intrigue and familial bonds.

Around fifty pages or so into the book, I texted Ashley complaining about overused tropes in YA, and I was 1000% convinced that Cruel Prince was turning into one giant YA cliché. I’m happy to say that turned a complete 180 degrees and surprised me with its dark, slightly *ahem* cruel nature (I’ll stop, I promise).
Now, don’t get me wrong, it had a couple flaws. I had a slight problem with some parts of the world not being explained very well, and a couple of the characters had some overused traits and “flaws”. But the plot moved along well and kept me fully invested, so the good definitely outweighed the bad.

I’m typically not one to jump on the faerie train — their stories have never truly been something I’ve gravitated toward — so finishing this story in a single sitting should let you know that it is definitely one to pick up. Fun fact: it has also been picked up by Universal Pictures to be made into a movie soon, so if that doesn’t have you running to your local bookstore or pulling up the Amazon app right now, I’m not sure what else can.

Let’s say a big Happy Book Birthday to Everless and The Cruel Prince! Thank you all so much for stopping by for our release day reviews. You have no idea how quickly we read these books for you, so we hope you enjoy these reviews. Have you read Everless or The Cruel Prince? Or do you plan to pick them up today? Let us know how excited you are in the comments.