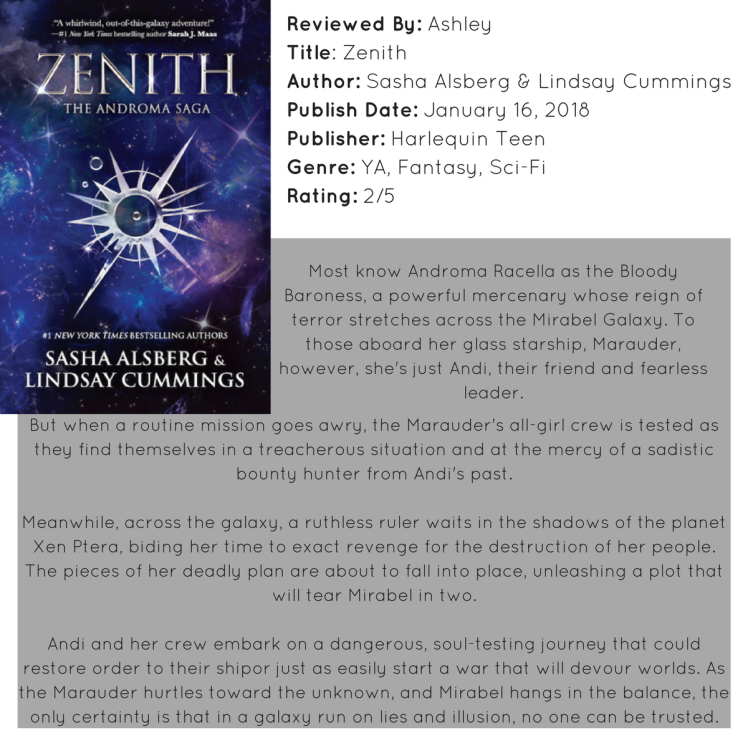 “What is it about memories…that gives us the ability to hurt so badly?”

Hello everyone! So I have been seriously dreading writing this review. I’ve spent the past few days after reading Zenith (and the week before while still reading it) thinking of how I am going to go about explaining my thoughts and feelings for this book clearly. After finishing the book I read reviews, as I often do, in hopes of cleaning up my thoughts on it. This did not help. At all. The Goodreads reviews on this book are 24% five stars and 25% one star. The consensus is as confused as I am.

Guys, this makes me angry. This was a time when I really needed those truthful and honest reviews, and I had to wade through the petty bullshit to get there. I was able to find truthful reviews about this book with cites to back up their opinions, so those did help. But come on, can we use Goodreads like adults, please?

Anyway, I’ve decided that I’m just going to talk through my thought process, and hopefully, that will not only allow me to settle on my feelings for Zenith but also get across how utterly confused I am in my feelings. I’ll try to be as clear as I can, but bear with me, this might be a long one.

To begin, let me say I’m neutral in terms of authors. I occasionally watch BookTube, but I don’t watch anyone in particular more than another, so Sasha as the author doesn’t matter. I’ve also never read anything by Linsay, so again this doesn’t matter. I will say, this book was one of the number one ARCs I wanted while attending BookCon last year. I only chanced upon it because my boyfriend happened to find the line, knowing I wanted it, and got it for me. I was happy,  the description intrigued me. So I was really excited about this one…now, I just don’t know.

I’ll start with the undeniable positives for me.

I will read the second book. I have decided that. I’ve also already spent the money on the finished copy. So that says something, right?

I also greatly enjoyed the sci-fi, galaxy, space elements. However, I don’t read a lot of heavy sci-fi so this will differ from others. I see it like this, I really like the new Star Wars movies, but I’m also not an uber fan of the previous movies, so I can’t tell you what’s wrong with the new ones. Same here, I don’t read a lot of sci-fi so I can’t tell you if a single government over many planets in other galaxies is logical. So you may be disappointed if you have experience with sci-fi. If the most you’ve read is the Lunar Chronicles (like me) then you’ll be impressed.

The writing was good, like in a grammatical, error-free kind of way. It got a little crazy with descriptions, ones that were too out there to even picture so I doubt the authors did at all. But it was easy to read, which is more than I can say for some ARCs I’ve received.

I also liked the action scenes, when there actually were some. The initial space chase scene, in the beginning, was really good for me. However, it was short and didn’t happen again, so there’s that.

The plot also intrigued me. An all-female crew of space pirates on a dangerous mission is right up my alley. However, it never felt like an all-female crew, since the “sadastic bounty hunter” (Dex) the synopsis mentions is with them the whole time. The plot was also kind of all over the place and I can’t tell you a climax. But I was bound and determined to read this book so I was patient, guys. This is why I will read the second book. I got into the story enough that I want to know what happens next.

Plainly stated, this has all been done before. Andi (our MC) is Celaena Sardothien. Plain and simple. And Zenith (basically the chemical weapon used against the masses) is like the lunar gift in The Lunar Chronicles. I’ve seen a lot of people compare this to Six of Crows (not in a good way) but I’ve yet to read Six of Crows so I’ll just leave it at that. It just feels like the authors took everything that has been successful before and shoved it into something, thinking no one would notice. But it’s hard not to notice. Also, the ship is called the Maurader and Andi calls herself the Bloody Baroness (which is never explained?), and any time either of those was mentioned I couldn’t stop thinking about Harry Potter.

So on that note, the characters.

They were very unlikable. We were never given any aspect that we could relate to any of the characters.

Andi is a ruthless killer but also a whiny baby about how she is a killer. She mourns every person she has killed but never stops killing. I also never found a logical background that allowed me to be okay with her being a murderer.

Dex is Andi’s ex. He’s like Thorne, except without redeeming qualities. Like just everything that would make you hate Carswell Thorne is amplified in Dex. Also, he isn’t “sadistic” like the description says. He’s a whiny baby too. So there’s that.

Lira is the pilot. She’s also a whiny baby.

Gilly is a thirteen-year-old murderer because that’s cool?? Who would think that’s fine?

Breck is a bulletproof giant. She has literally no point.

Nor is basically an evil queen who decides to do evil queen things. She has the potential to be a good villain, except that she had her own chapters that made her unlikable in a bad way. And I usually really enjoy the villains.

Valen is the stolen general’s son who is the sole purpose of their dangerous mission, to save him.

And there was absolutely no character development. Not a fucking drop. They whined about their lives the entire time and didn’t do a damn thing about it. From beginning to end they all said the same things about themselves, over and over and over, and never changed. This was 500 pages of the same people going nowhere.

And still, on the topic of characters, there are like 6 POVs in this book. Andi and Dex, cool I can handle that. But then there were Nor’s chapters that I hated and Valen’s which were utterly pointless and added nothing to the plot. Then there was Lira’s, the pilot of the Maurader, who again, added absolutely nothing to the plot. I mean, nothing. These weren’t necessary, so why did you waste so much time here? Eliminating these chapters would have narrowed the plot down considerably and allowed a concise plot to actually shine through.

BUT THEN there were Nor’s mother’s chapters from the past that was even more pointless. She was like “chosen” by some lights or some shit that was never explained. And then she used like some Vampire Academy compulsion shit to make a king marry her, had a daughter, made this other ruler take her as a war prisoner and then RAPED HIM. Listen here, because this is something I hate so fucking much. If a male character messed with a female character’s mind and forced her to have sex with him over and over and over again, you better believe this book would be burned to the fucking ground. But no. A female character repeatedly rapes a male character and it’s never addressed. Never discussed more than her using “compulsion” to aid in her plan, which is what? I don’t know. Because it’s never explained!

And speaking of never explained, there is something so very off in the flashbacks and background stories for these characters. We know that Andi is a runaway from the law, and we even find out later how she got away. Then we get this brief glimpse of how she met Dex, and we get like 98 glimpses of how their relationship ended in him with a knife in his chest and Andi and her crew running off in his ship. But we have no idea how she met her crew, we only know a little about Lira’s past. Gilly and Breck get absolutely no background whatsoever. And we never get background on them as a whole.

If I’m honest, this all felt like a jumbled mess. Maybe that’s what I’m getting at with all this. I pushed through and found enough of a plot to keep myself interested. But truthfully, now that I’m typing this, it feels lazy. Nothing was developed passed a half-formed idea. It’s annoying when I look back on it.

Okay, I know this review isn’t the prettiest and it just a mess, but that’s how this book has made me feel. I just… don’t know. 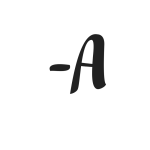