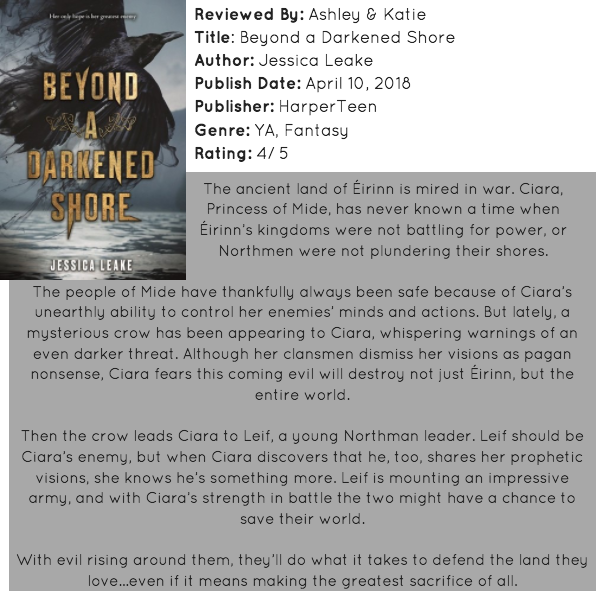 “The laws are clear: there are only two strong enough to defeat them. One born for it, the other through great sacrifice.”

Ashley: Beyond a Darkened Shore is a tale of two enemies, a Celt woman with inhuman abilities and a Norse man with the strength of gods. When both of their lands are threatened by powerful ancient beings, they join together to save their lands and become an unstoppable force.

I must say, I absolutely loved the plot of the book. I probably could have dropped the star rating a bit due to some technical flaws, but the plot saved it. There were so many foes for our two main characters to defeat, both mortal and immortal, that I was never left bored. There’s an abundance of brave warriors, tense battles, and mythological gods and creatures to keep you on your toes.

The characters were also rather enjoyable. Ciara is the Celt warrior princess with the strange ability to enter and control people’s minds. This makes her an outcast, as her clansmen are Christian and see her as something demonic. Ciara has a great amount of character development. Not only does she have to learn how to wield her abilities as they morph and grow, she also has to learn to trust her enemy in order to win against the ancient beings.

Leif is the Norse warrior who was gifted the ability to fight like a god. Leif is basically perfect. He’s charming, gorgeous, super strong, and has zero issue trusting Ciara or her abilities. This is something I had a slight issue with, since his perfection left absolutely no room for growth or development. He always said the exact right, charming thing at the perfect time, he was always super sweet and understanding, and he lacked all character flaws. Ciara often referred to him as “arrogant” but I can’t even recall him ever being arrogant at all.

Something that also bothered me was the pacing of the book. Not necessarily the events, but the unfolding of the events. There was little build up in certain situations. It was like, “it stormed, lightening flashed, a man appeared.” There was no anticipation in some instances for what was coming. One sentence threatened danger and the next it was there in front of them. I like a good build up for what’s to come.

Ciara also has abilities beyond just controlling minds, and she must learn them throughout the story. However, I felt a lack of connection between the different abilities. I don’t want to give it away, but it felt like a jumble of gifts that didn’t flow as well as I wanted them to. They were also a bit underwhelming at times. Her abilities require her to not partake in a battle but be guarded on the sidelines. Maybe I would have been more okay with this if someone was attempting to kill her while she was unconscious, but no one ever did. Again, that made it a bit underwhelming.

I think, overall, you can tell this is a debut novel by Leake, in that things like pacing and perfected dialogue and character development come through experience. I still really enjoyed this book, the plot, and the characters so much. I can’t wait to see what else Leake has in store for future books because I wholeheartedly believe it’s only going to get better.

Katie: In Beyond a Darkened Shore by Jessica Leake, two people from opposing clans have to come together to defeat mortal and immortal enemies. The premise was really intriguing to me, and in most ways it was successfully entertaining.

I enjoyed Ciara and her love for her country and family. She really grew throughout the progression of the story, and it was interesting to see her powers grow and expand. I’m not familiar with Celtic or Norse mythology, so it was cool to experience the terminology and stories. Granted, having the glossary and pronunciation guide toward the front of the book would’ve been more helpful than it being in the very back, but that’s on the publisher, not Leake. Like Ashley said, the powers Ciara had didn’t seem to mesh well together, but that could just be my inexperience with Celtic folklore. Overall, her character development was done quite nicely.

I agree with Ashley on pretty much all fronts when it comes to Leif. He was so “cardboard cut-out” that it left me not really rooting for him and Ciara as a couple. (She could do far better in my opinion!) He supposedly had flaws, but I honestly don’t remember seeing much, if any, of them. He was just too perfect.

The plot was definitely entertaining, but I felt like it went a little all over the place around halfway through. Some events would happen, and I would have to take a minute to gather what they were doing. It was like the main goal they had from the beginning kept getting pushed to the back burner until it was necessary at the very end.

That being said, I oddly enjoyed the gore of the battle scenes. I like it when authors don’t shy away from showing war and the brutality of it because it makes it even more realistic. There were definitely moments where I’m sure I made some disgusted faces while reading, and it made me happy. Is that weird? Maybe I just love Game of Thrones too much.

All in all, a solid read. I kind of wish there was more at the end, but I feel like that’s something to applaud.

Have you read Beyond a Darkened Shore? Let us know your thoughts below!