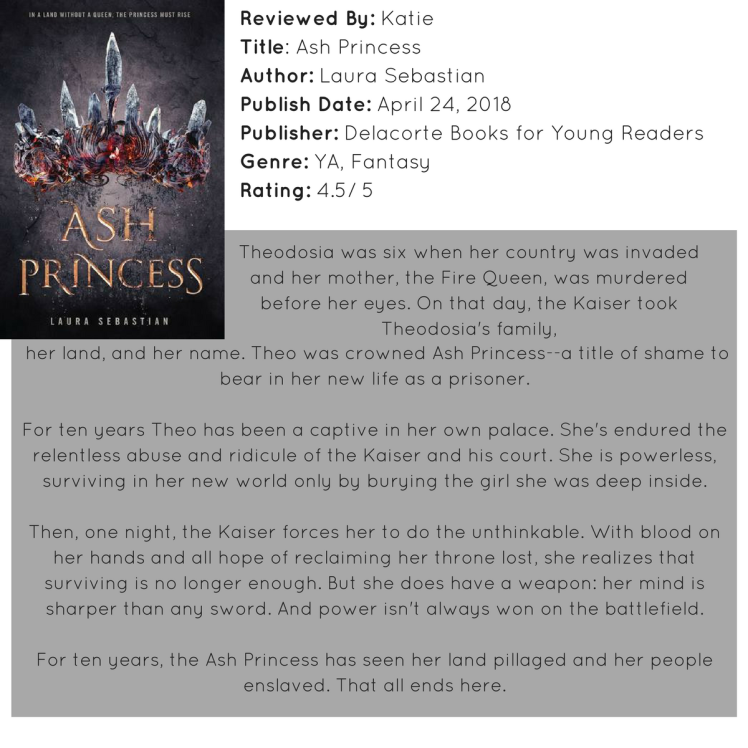 “‘We are not defined by the things we do in order to survive. We do not apologize for them,’ she says quietly, eyes never leaving mine. ‘Maybe they have broken you, but you are a sharper weapon because of it. And it is time to strike.'”

Admittedly, Ash Princess was a little difficult to start. The story revolves around a girl named Lady Thora (previously known as Theodosia) who is being held captive by an evil tyrant who had her mother killed, her people enslaved, and forces her to take punishments for “crimes of treason” she has no part in – all the while wearing a crown made of ash to isolate and humiliate her. Dark, right? This was why it took a bit for me to get into. The whole beginning is setting up this world where Theo is basically tortured and complacent in that torturing. The whole time I was reading it, I just wanted to scream and shake her shoulders to get her to do something. Obviously, she did nothing as self-preservation, but it was incredibly hard to read about her just standing there and taking all of the abuse, physical and mental.

After the first third that focused mostly on Theo’s personal hell, some hope came in the form of her childhood best friend, Blaise. Honestly, I never fully trusted him from the get-go. The guy did nothing but help Theo, but I still felt something was a little off about him.

Theo’s “friend”, who also happens to be the daughter of the guy responsible for murdering Theo’s mother and administering every punishment she wrongfully receives, was actually the worst. Surprising, right? Nope. She tries to keep Theo content with her horrible life, yet Theo still cares for her. I never really understood that friendship. Maybe I’d feel differently if I were her and Crescentia was the only person around. I mean, don’t get me wrong. Cress has some redeeming moments, but they were all flashbacks to when they were both younger. It seemed as if Cress (who shouldn’t be given that nickname because I think instantly of the cinnamon roll Cress from The Lunar Chronicles) grew to be more like her Kalovaxian people as she got older.

The other main character was the Prinz Soren. I didn’t mind him that much, honestly. He seemed like a bit of a pushover, but I feel like he has a good heart deep down. While Theo received 99.99% more abuse from the Kaiser than Soren ever did, it still made me feel for him that he has someone like that as a father. I personally like him much more than Blaise, but then again, I’m a sucker for a prince with a good intentions.

All in all, Ash Princess was definitely dark, but it was intriguing and kept me interested. It’s a tale of survival, family, and loyalty with both characters you love and love to hate. I’m excited to see where the sequel goes, and I’m more excited to see Theo really come into her own. She grew tremendously over the course of this first book, so I’m sure she can only grow stronger through the next two. 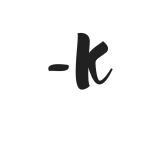