If you weren’t aware, Lost in Pages hasn’t always been Lost in Pages. Before Katie and I decided we wanted to blog together, this was Fictional Living, my own personal blog. As Katie and I hate to see reviews go to waste, we decided to start reposting some of my old reviews, to make sure they are still up for readers to view. So don’t be alarmed if it says you’ve already liked this post, or it seems like you’ve read it before. We are just pulling them from drafts with a new look. Enjoy!

“My mind shut down. Went blank. Went somewhere I wouldn’t have to remember. Even when they pulled out my fingernails, it wouldn’t come back.”

Like a number of the books I own, The Girl Who Was Supposed To Die had been sitting on my shelf for quite some time. The title and the cover combined made me instantly intrigued to purchase the book, and so I was glad I finally got the chance to pick it up.

This book is quite a thriller. It begins with our MC, Cady, waking up in a cabin with no memory of who she is, bloody and beaten. She overhears one man telling another to “take her out back an finish her off,” and that’s where our story really kicks off. 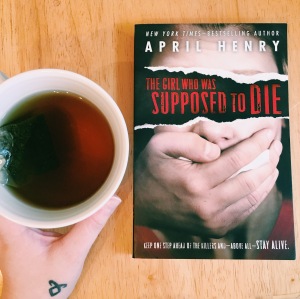 Although Cady has no memory of who she is, who her family is, or why these men want her dead, she begins a battle to get the hell out of the cabin and figure out exactly what is going on.

Along the way, she meets a completely random guy in a McDonald’s who ends up being the best help she could ask for.

One thing I really enjoyed about this book is the originality. It seems these days that we don’t often get story variations, so it’s nice when an author comes up with something completely unique. I also enjoyed the layout of the chapters. The story only spans like three days, so each chapter is labeled with a day and a time. It really puts into perspective how much happens in such a short amount of time.

One issue I found in this book may not seem that big to some, but it was to me. Cady was very analytical about what was going on. We got a lot of detail on what exactly was happening, but not how she was feeling in all of it. It at times felt like she was a robot, just surviving and not emotionally attached to her situation. 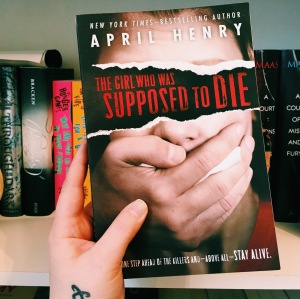 There were also some issues with her helpful sidekick, Ty, that she teams up with. He didn’t get much of a background story, and the way the author set it up, I think he needed one. His life was so hard but we never get a description of that, not really anyway.

And lastly, as cool as this story was, the ending wrapped up quickly and kind of unimaginable. The premise of the book is just so good, but the explanation for everything that has happened to Cady is way too unrealistic for me. And the ending, although it made sense when explained, just went by so fast.

Overall though, I did find the book thrilling. I was super curious what exactly was going on with Cady the whole time. And it really made you question so many possibilities, that you didn’t know where it was going.

I recommend this book for sure, especially if you are looking for something quick and different that can up your Goodreads reading goal!

Have you read The Girl Who Was Supposed to Die?