Hello, everyone! Today I’m coming at you with a book review. I know, two review posts in one month, who am I?? I’m not saying The Slump™ is officially over, but I feel like I’m making some progress in defeated it.

I was feeling bored and in a “I need a quick, lovey-dovey book” kind of mood, so I turned to my Edelweiss page for some e-ARC picks. I ended up choosing Beach Read by Emily Henry, which doesn’t release until May 19th, but I felt like reviewing it now anyway. I’ve never read a Emily Henry book, but she’s had a few YA releases over the last bit of years – The Love That Split the World, A Million Junes, When the Sky Fell on Splendor, and Hello Girls. I’ve heard mixed things, either people loved them or they didn’t, so I wasn’t sure what her first dive into adult romance would be like.

To shorten a fairly lengthy synopsis, Beach Read is essentially about two writers (January Andrews and Augustus “Gus” Everett) who went to college together and happen to become next door neighbors. Both are going through some pretty heavy emotional and familial problems in their lives, so to distract themselves from those problems – aka adulthood 101: always avoid – they strike up a deal: the romance writer will write literary fiction and vice versa. I thought this concept was definitely cute, albeit cliché with the female romance writer showing the brooding male that love isn’t as scary as it may seem. 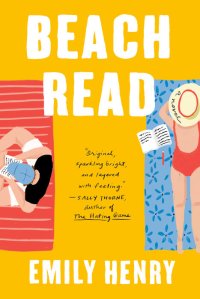 The story definitely had some emotional parts with the issues each character was going through being dealt with throughout the plot, so if you’re looking for something a little hard-hitting, I recommend. I really liked the progression of the relationship between the two main characters, and a couple of the side characters were highly entertaining. One of my favorite parts of the book was the conversation of female and male writers and the stereotypes of the genres. I liked that January wasn’t afraid to stand up for herself and she wasn’t ashamed of being a romance author despite the criticisms that came with that profession. She tried breaking down the stereotypes and biases, and a few of her angry speeches about the topic were some of my favorite parts.

Overall, I’d give this read a solid 3.5 stars. I enjoyed the characters, and the plot was somehow a basic rom-com while also being oddly original. If you’re looking for a cute beach read, then Beach Read would most likely win over your heart. Be sure to look out for it this upcoming May!

✨#ad Thanks to @randomhouse for sending me these books! ✨ ⁣⁣
✨Hello, everyone! ⁣I’m trying something different – booktok! I’m terrible at it, and while it makes me feel like I’m 100 years old, I’m enjoying it 😂⁣
✨ Happy Monday, everyone! ✨ ⁣
🌟 @lbardugo shared promo photos for the new @netflix Shadow and Bone series yesterday! It premieres April 23rd, and the photos make it look incredible. That means I have around three months to finally read all the books in the Grishaverse – easily done, right? 😅 ⁣
🌟 Hello, everyone! I will eventually get better about posting more regularly, my bad 🤦🏻‍♀️ ⁣
✨ Hello, 2021 ✨⁣